Your cart is empty

The symbols of the Bagua (Bagwa) are a Yin Yang and Eight trigrams.

The Bagua (Bagwa) consists of eight sacred emblems called trigrams, directions or activities. It is used to encourage the flow of Chi (life force) which is regarded as the primary building brick of the universe. The Bagua (Bagwa)  is said to have been born on the back of a creature which rose from the deep at the dawn of time. The secrets of the Universe are believed to be contained within. The Bagua (Bagwa) can be used in Feng Shui to balance and move Chi.

Yin Yang is the concept of duality forming a whole. Two halves that together complete wholeness. Yin and yang are also the starting point for change. When something is whole, by definition, it’s unchanging and complete. So when you split something into two halves – yin/yang, it upsets the equilibrium of wholeness. Both halves are chasing after each other as they seek a new balance with each other.

The word Yin comes out to mean “shady side” and Yang “sunny side”.

The symbol for Yin Yang is called the Taijitu. Most people just call it the yin yang symbol in the west. The taijitu symbol has been found in more than one culture and over the years has come to represent Taoism.

On each of the eight sections of the bagua is a trigram. Each trigram is a series of three lines, called Yao symbols. The lines are in various combinations and symbolize the following:

The Meaning of the Trigrams

The lines of the trigram are either a long solid line or two short lines. The solid line represents yang or male energies of nature while yin, the female energies are represented by two short hyphens. The Yao lines are put together in a grouping of three, placed one over the other.

The trigram symbol for heaven is three solid lines, showing male energy that is strong and undivided. Heaven is the king or father. The translation for heaven is Quian, Chien or Chyan. Heaven is the creative celestial force from which everything occurs. Its direction is northwest, and it represents helpful people and travel on the bagua map. 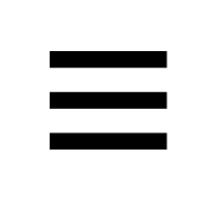 The translation and for Earth is Kun. Its trigram is three yin lines as it is receptive and open to natural forces, such as sun and rain. Earth is the compliment of heaven and represents the feminine as mother earth and the origin of life. On the bagua map earth's direction is southwest representing love and marriage.

The trigram for thunder consists of a solid line below two broken lines. Representing strong movement, thunder is full of vitality and activity as it develops and grows. The translation for thunder is chen. The bagua direction of thunder is east representing health and family on the bagua map.

The translation for mountain is ken or gen and its symbol on the bagua is two solid lines above a broken line. The bagua direction is northeast, and it represents the life aspect of knowledge and cultivation.

The trigram for wind is a broken line below two solid lines. It represents the life aspect of wealth and prosperity and its direction is southwest. The translation for wind is xun.

Translated as li, fire's direction on the bagua map is south. It represents the life aspect of fame and reputation which is often called the illumination area. The trigram for fire is a broken line between two solid lines.

The trigram of lake is two solid lines below a broken line, showing that a lake is receptive and open on the top and solid on the bottom. It represents happiness and joy. The bagua direction of lake is west. and it represents the life aspect of creativity and children. The translation of lake is tui or dui.